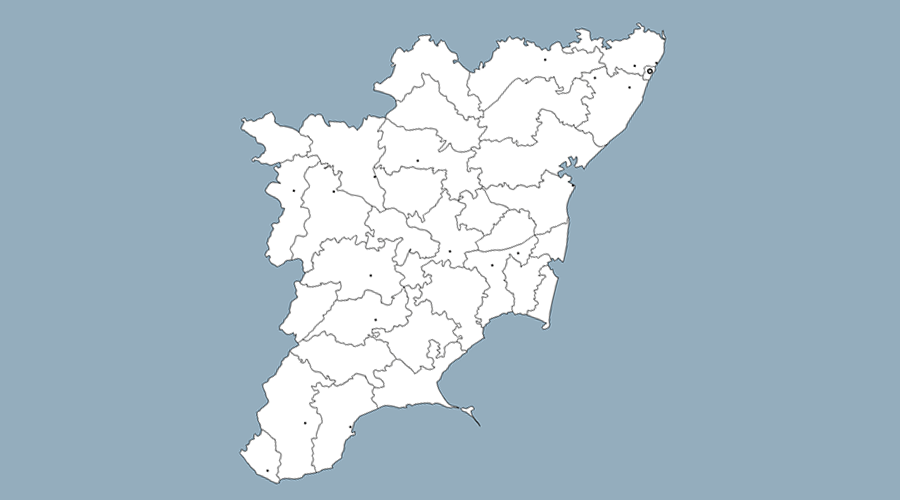 I have worked with a lot of good folks in Tamil Nadu (TN) pretty closely enough. As per Tamil Nadu Government statistics, the 70 million plus population of the State generates a GSDP of around $ 260 billion which is 8.5% of India’s GDP, making it the second largest contributor to Indian GDP, only next to Maharashtra which is at $ 420 billion.

They also need ‘Vikas’ and nothing else. TN as a State is pretty educated, smart and of course they are passionate too. But make no mistake, they are intelligent enough to understand and make decisions. Past is not an indicator of the future. The young generation is aspirational and not just about exploring the country. They understand that there is no more American or UK dream. The next growth is in their home state or Karnataka or other parts like Gurgaon. IT has shown them that they can conquer the world sitting right there. Incidentally, while most of the country keeps referring to Kerala as a highly literate State, not many have given due recognition to the fact that neighbouring Tamil Nadu, as per the 2011 census, had a literacy rate of 86.8% among the male population and 73.4% among the female population. As a comparison, let me highlight that the all India average for the same period was 74.04% for males and 64.6% for females.

What does TN need from its Government?

Some things basic, some aspirational and some progressive; including water, power, good roads, sound governance etc.

This is indeed a serious issue, given that the State riverine systems do not have much water. To that extent there is a sense of helplessness . Some of it is man made and self inflicted. Solutions to this also need a high level of maturity and understanding of one another’s problems especially among the political leaders of neighbouring states, Karnataka, Kerala, Andhra Pradesh and the Centre. It needs alignment and statesmanship across the lines. A good beginning was made a few decades ago with the Telugu Ganga project when N.T. Rama Rao was the Chief Minister of undivided Andhra Pradesh which did alleviate the problem to some extent but a lot more needs to be done.

There have to be alternative sources too, like rain water harvesting , very well begun by Selvi J.Jayalalitha.

Desalination projects are the need of the hour, though they are costly. The Government of TN has taken the right steps in proposing to instal a series of mini desalination plants within a time frame of the next six months which would provide some relief to the main city. However, these mini desalination plants can serve the needs of only around 100,000 people per plant and hence this is a step which definitely cannot be a permanent solution.

Water conversation and conservation needs to be taken up earnestly and the long term solution lies perhaps in having an integrated water policy for the State which includes in its study, the rejuvenation of traditional water bodies all across the State. And this is not difficult. History has recorded that the great Chola Kings built the Grand Anicut across the river Kaveri to ensure that enough water was available for irrigation purposes. The Grand Anicut, still functional, was first built sometime during 100 BC - 100 AD.

Another great invention of ancient India and TN was called “Eris”. For those not in the know, Eris are nothing but a systematic interconnection of tanks to ensure that the water level is balanced across the network, allowing easy cultivation and preventing soil erosion. The net benefit is optimal utilisation of water resources.

The new river interlinking project across the country, proposed by the Government, is in many ways a very large plan of this basic concept used in TN since generations. However, in both cases, this will need strong political will to revive the traditional waterways by removing encroachments and carrying out regular desilting. The results of course will be long term in nature and will be to the benefit of everyone in the State across successive generations.

Until a few years ago, this used to be a problem but now at least in Chennai, this is not an issue. The work on power done by the Centre seems to have worked. However, a lot more needs to be done to meet the never dropping demand for power riding on the back of increasing industrialisation and the requirement from the services sector. Tamil Nadu’s per capita electricity consumption is close to 1,300 Kwh which is among the highest in the country.

In May 2019, Tamil Nadu recorded a peak hour requirement of 16,000 MW showing the requirement galloping at a brisk pace. It meets the requirements by also buying power and strives to maintain balance despite the fact that only one unit of the Kudankulam nuclear power station is currently functional. The State has also actively supported projects in the wind energy sector considering its long coastline.

Roads have been an important indicator of development in Tamil Nadu. The New Indian Express in a report of February 4, 2019, stated that the Ministry of Road Transport and Highways (MORTH) report, released on November 11, 2018, revealed that the total length of National Highways in TN increased to 6741.5 km from 5, 381 km in June 30, 2017. Some good work has happened here but more needs to be done. The total length of roads in Tamil Nadu exceeds 62,000 kms.

This has in fact ensured that people do not go home hungry but also can produce lethargy. Tamil Nadu, unfortunately, has been at the receiving end of a substantial bad publicity on account of its freebie culture of televisions, sewing machines, etc. However, other States like some in the North which went around distributing bicycles and laptops were treated with a lot more respect in the media. Not that two wrongs make a right, but the real issue at a national level is the reluctance of political parties to part ways with the freebie culture.

Farm loan waivers are another large part of this culture which actually has substantial impact on State finances. Add to this, the pay commission reviews, the inability of some States to produce a GDP growth higher than that of borrowings, the impact of Ujwal Discom Assurance Yojna (UDAY) and overall, many States’ finances could well be stressed out. However, if properly communicated this culture can be changed. If citizens see that fundamental things are done right and results visible, they may well want to do away or reduce their dependence on freebies. It needs sharp communication and citizens will understand.

According to a CRISIL study, the GSDP of TN in 2018 grew by 8.1% against an all India average of 6.7%. This is a fairly strong achievement considering that the base itself is large as compared to States which reported higher growth rates but from a smaller baseline. On the flip side, CPI Inflation grew at 4.9% in 2018 as compared to the national average of 3.6%.

Many States fell foul of the Fiscal Responsibility Management Bill Objectives. TN was one of the few States which kept its fiscal deficit at 2.8% (Recommended less than 3%) of its GSDP. TN’s Debt to GSDP is currently manageable at 22.3% in FY 18 but the high average interest cost of 7.9% (average between 2013-2018) is a cause for concern. For comparison, let me state that Maharashtra’s Debt to GSDP ratio for 2018 is at 17.4%.

Having said that, the freebie culture of TN, in my experience, it is not an unmanageable malaise as yet. I am not clear as to whether a proper impact assessment of this has been done to see that the system of free food and ration has actually been to the benefit of the truly needy beneficiaries. Direct benefit transfer to bank accounts is certainly more effective, efficient and cost-saving as well.


Corruption and leakage of public resources

What TN aspires is clean and efficient delivery of services. No petition over petition. No greasing.

The political class in TN are not that apathetic as in many places in the country. I have come across genuine and smart politicians in TN who are comparable in terms of their knowledge of public policy to the best in the country.

Law and order improvement will be one frequently asked request. There have been ups and downs over 70 years but largely good at least in urban and semi urban clusters.

Caste issues. This still evokes interest, but the new generation seeks performance and can relegate caste issues to the background.


What is TN blessed with.?

TN is an educated, industrialised, urban for most parts, IT savvy citizenry. If they can do online they will. They are entrepreneurial too. However they have been stymied for decades due to non alignment with federal government's for various reasons. Their biggest demand after water would be corruption free governance. Alignment with Federal Government and mutual cooperation, will also see more projects and funds being allocated. Already, the new government at the Centre has announced water programs in addition to existing ones. Let us hope for the best. Water, Good governance, good roads, and close coordination with the Centre could well be the key that will catapult Tamil Nadu’s ranking to the top of the league in the list of prosperous and well managed States of the Indian Union.