Is Hindu Culture an antidote to global religious terrorism?

I walked out of the movie theatre after watching K Files and asked myself whether this movie suggests some lessons beyond Kashmir? Is it the atrocity that befell the Sanatanis a.k.a Hindus at large? , Is it the impact of terrorism sponsored by hostile neighbours? Is it a part of an overall plan to enforce one set of religious beliefs on another set of people who do not subscribe to the view of the group that seeks to impose its view? Did this kind of carnage have happened if Hindus were in majority in Kashmir? Hindu India is largely safe for its minorities, who are by the way 15% to 20% of its population. It is to be remembered that Hindus who were the original faith and title holders in Kashmir before 1300 AD. 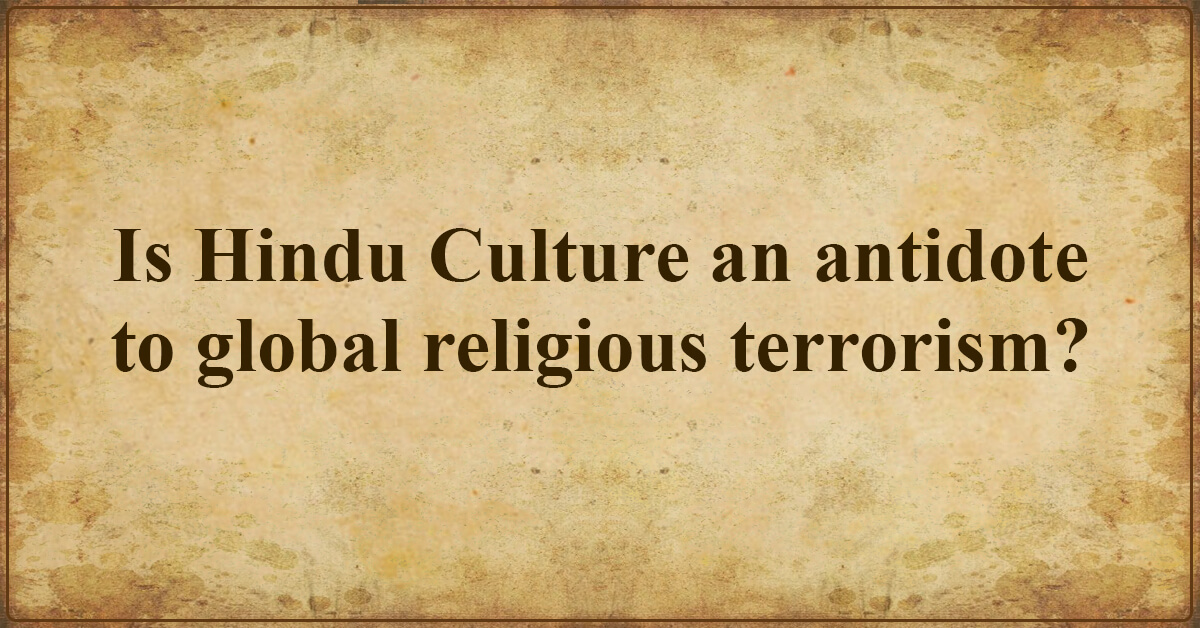 I can see the following three thoughts emanating from the movie and the readings.

Religion when mixed with terrorism is a deadly cocktail and brings only misery to the world. It is misused. It pushes people to a mindless, illogical and brutal violence desired by the person causing the violence.

The massacre of one set of people that happened needs to be remembered everyday, so that we can apologise to those that suffered. The corollary of that apology is that this must never repeat anywhere in India or for that matter anywhere in the world. The unacceptable reasons for such genocide is political dominance, economic conquest, imperialistic ideas of people that govern, a false notion of superiority or simply “My Way”. This does not give anyone the right to take the life of another person. What gives someone the right to say “ Convert”, “Get Killed” or “Pay a Price to maintain your faith”? My view is that no amount of deprivation, perceived or otherwise can justify such a thought process. The Kashmiri Pandits were subjected to inhuman levels of torture and ethnic cleansing. Strangely, none of the mainstream media has even referred to it as a religious genocide which is what it was and they were let down by the very State whose duty was to protect them. This should not happen again.We must therefore remember this everyday to ensure that it does not happen again and thus console the survivors to some extent.

Ideally, religion and religious thought should improve a person’s core, make him more understanding of another’s thought process, help him live in a spirit of brotherhood, love and understanding with other people who do not share his faith and generally do good. The most cherished faith or religion or culture will be the one that fosters openness, debate, right to live, right to choose, tolerance, inclusiveness, freedom to practise faiths or systems.These are also the basic tenets of democracy as we know it today.

All the above are the governing principles of the Vedic Sanatan Dharma a.k.a Hindutva. Under this Dharma, you are free to worship, be an atheist, worship natural elements, worship the divinity behind the images and idols installed in places or worship, worship a formless Divine creator, do good to people, feed the hungry, provide clothing and housing to those who do not have it etc.There is a vast array of 33 Crore Avatars( human manifestations) regarded as gods.Sanatanam is one culture or system or faith that did not disturb or stop people from practising Islam or Chirstanity or Bahai or Jewsih religion in our country.. Instead it gave these foreign religions the room in this country.”.Ekam Sat, Viprah Bahu Vadanti” Vedic principle ,that evidences tolerance for all belief systems. “Vasudhauva Ktumbakkam” says the whole world is one family. The opening lines of the Rigveda (the oldest of the four Vedas), “Agnim ile pur-hitam yajnasya devam ritvijam hotaram ratna dataram’ is an invocation to the God of Fire. Similarly, the opening lines of the Yajur Veda, “Ishe tvorje tva vayava stha devo vah savita ….” contain references to the Sun and energy and its worship. We are all aware of the importance of renewable energy today the positive mental energy, the physical energy required to carry out our day to day activities and the supplemental energy required to power our gadgets.“Tark” or debate is one of the cornerstones of this system. There is an anecdote of debate between Mandanana Mishra and Adi Shankaracharya which was moderated and adjudicated by Mishra's wife Saraswati.The Vedic anthem talks about the valout its women. Early Vedic literature also talks about the 1 legged woman warrior Vishapala, who was given an artificial foot to fight the war.That is gender equality and Power to the woman. You become a Sanatani by following it, you never get converted.Santhanam followed democratic principles 10,000 plus years ago under the concept of Janapadas. There are mentions of democracy then called as Janapadas and Maha Janapadas in Vedic, Buddhist and Jain literature in 6th Century BCE.There were elected gram panchayats, evidence of which has been found in B.C era in Uttara Merur Tamizhnad. In many of the Janapadas, the head was a woman. I am sure that we will find many more anecdotes. practical.. The Vedas or the Vedic Sanatan Dharma, is based on human social law/jurisprudence, reverence for Nature and Science. Do we know that Vedic Mathematics enunciated “Nikhila Sutram” that enables instant multiplication of large array of numbers.It is more important to understand the original text than anything because all the others including Bhagavat Geeta are interpretations or expositions of the Vedas. Bhagavat Gita is mostly “Way of Life”. It answers many day to day problems.

All of the above, clearly an evidence that Sanatnam is very relevant and the origin of democracies today. If Sanatanam is healthy, so will global democracy. 1/7 or a billion Bharatiyas practise Sanatanam and at least another billion current day democracyIt is natural that Sanatanam is sought to be compared to other faiths. I believe this culture is the closest to “Being Human” or Human Social Science or Science itself. It is more than a Theology or even Philosophy. It is a simple concept structured well and may well be the antidote to terrorism,expanisionsim, autocracy etc that the world badly needs. Nobody can stop the idea whose time has come. In this case it is rejuvenation or renaissance or Paravartan.Democracy is enlarging and so is Sanatanam!