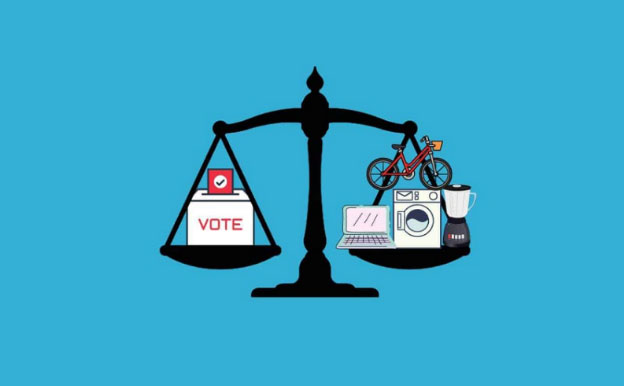 Are my taxes to be used for cheap electoral promises?

Should the taxpayer bear the brunt of electoral promises made by political satraps? Electoral practices over the years have changed to become more orderly and transparent. The first reformist move in this direction was made in 1991, by the then chief electoral commissioner Shri T. N. Seshan, an officer of amazing clarity. For the first time in the history of Indian elections, I remember having seen videographers following every inch of the candidates’ movements and statements. Then came the loudspeaker ban. This was followed by Electronic Voting Machines. Then came the judgment of the Supreme Court in 2013 (S.Subramaniam Balaji Vs Govt. of Tamil Nadu and Others) which gave teeth to a document that has never been given statutory status. This was the Model Code of Conduct (MCC). The Model Code of Conduct made it obligatory on candidates to follow certain good practices in electioneering. Today the Model Code of Conduct has become sacrosanct, for the purpose of elections and violations have reduced by the day.

However, many parties today have gone to the next level beyond Roti Kapda and Makan promise from the earlier days. They promise, among other things, free electricity and free water with certain consumption limits. In Delhi alone, the cost of freebies on electricity, water and commuter passes totalled Rs. 2,470 crores in 2019-20 which is almost 4.11% of the total budgeted expenditure of Delhi Government which is Rs. 60,000 crores.

The freebie promises made in Punjab are equal to Rs.27,000 Crores on a total expenditure of Rs.60,000 Crores (4.50%). It is common knowledge that most discoms including Punjab have not been paid by the government for the cost of freebies. This has resulted in deterioration in services and will eventually prevent privatization, unless governments end up managing these utilities better. It is better to provide quality power rather than unreliable fluctuating power that destroys equipment. It has been observed that farmers tend to keep the pumps on all the time since power is free, motors burn and water level keeps falling.

The model code of conduct on the basis of the judgment by the Supreme Court of India has already a mechanism to cope up with these nonsensical shoot and scoot promises, made by the candidates without any basis.It mandates that both Ways and Means to achieve this must be stated.

The relevant mechanism is briefly produced below:

In the interest of transparency, level playing field and credibility of promises, it is expected that manifestos also reflect the rationale for the promises and broadly indicate the ways and means to meet the financial requirements for it. Trust of voters should be sought only on those promises which are possible to be fulfilled”

But this is not enough! The election commission is requested to simply exclude specifically never ending freebies that have no basis like free water and free electricity under this directive and restrain political parties making such promises that damage the state finances, even though ways and means may have been disclosed. Any such promise must be termed as violation of the MCC. While it may be advantageous for political parties to make freebie promises, fulfilling them causes financial stress to the State and by implication the exchequer and of the finances of the utility Corporation, results in poor service and ultimate degradation. However parties making the promises may well pay for it from the party funds, since it is the party that benefits from it by way of being voted in. The argument that citizens benefit and hence the state must pay is not a valid argument as it harms citizens' interest indirectly.

And lest this note be interpreted as a rant of jealousy against me not receiving 300 free units of power, let me state that every right thinking individual in the country will be in favor of extending a helping hand to those families that are much below the poverty line and consuming upto say 300 units of electricity or less per month with this being reviewed every three years or so..